It's our mission at Urban Upcycle to help preserve the Earth by minimising negative environmental impact.

We educate the community to rethink, refuse, reduce, reuse and repurpose.

Our crafting experiences provide the opportunity to plant the sustainability seed, helping to create eco-friendly habits and lifestyles, which can have an everlasting impact on our environment.

We must preserve the one and only Earth we have.

It is imperative that we educate our children as best we can to help preserve the one and only Earth that we have. As parents, teachers & role models, it is our responsibility to help pave the way to a happy, healthy & sustainable future for generations to come.

If we all start by making a small effort, it will shortly become habit. As you lead by example, these habits will become other’s habits and the flow on affect will continue. Start small and huge things will happen. Give it a go and you’ll see for yourself!

We encourage those we come into contact with to:

Some people you will meet at your crafting experience. 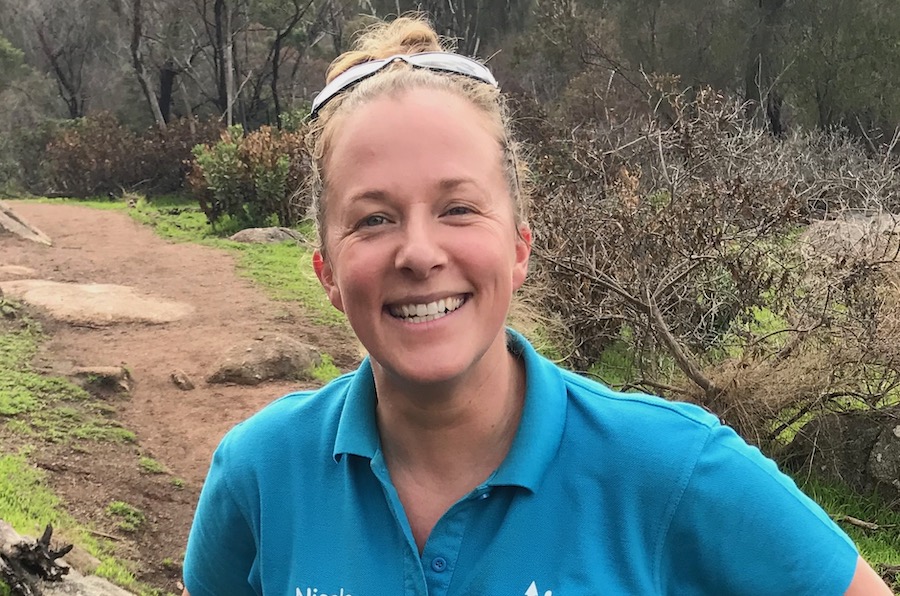 Nicole has been the Sole Owner of Urban Upcycle since 2018, having Co-founded it with her sister in 2015.

Her love of the environment started from a young age, with her earliest memory of such, taking part in Clean Up Australia Day as a Brownie (Girl Guide). At the age of 14, Nicole became a vegetarian, having developed a strong devotion to animal rights.

Previous to Urban Upcycle, Nicole held a role in the waste industry, spending time at landfills, recycling centres and businesses whom often produced large amounts of unnecessary waste. During this time, it opened her eyes to the need for education throughout the community to assist in limiting waste to aide in reducing negative environmental impact. From here, her passion for the environment grew immensely, as she felt a strong desire to help make change and that’s when Urban Upcycle was born.

Spending time with children and watching the excitement of creating something new from something old, helped Nicole realise where he heart lay. It became her main objective to create a fun, relaxed, non judgemental environment for children to learn, experiment, express themselves all whilst caring for our planet. After all, the children of today, are the leaders of our future. She wants all children to learn that they can make a difference and that everything they do, can have an affect, whether large or small. Nicole takes delight in parents telling her that their child refuses to throw anything away anymore, just in case they can make something new from it!

In 2020, Nicole chose to streamline Urban Upcycle’s services, specialising in creating memorable and impactful experiences, all whilst spreading the rethink, reduce, reuse, repurpose message within our community, far and wide. 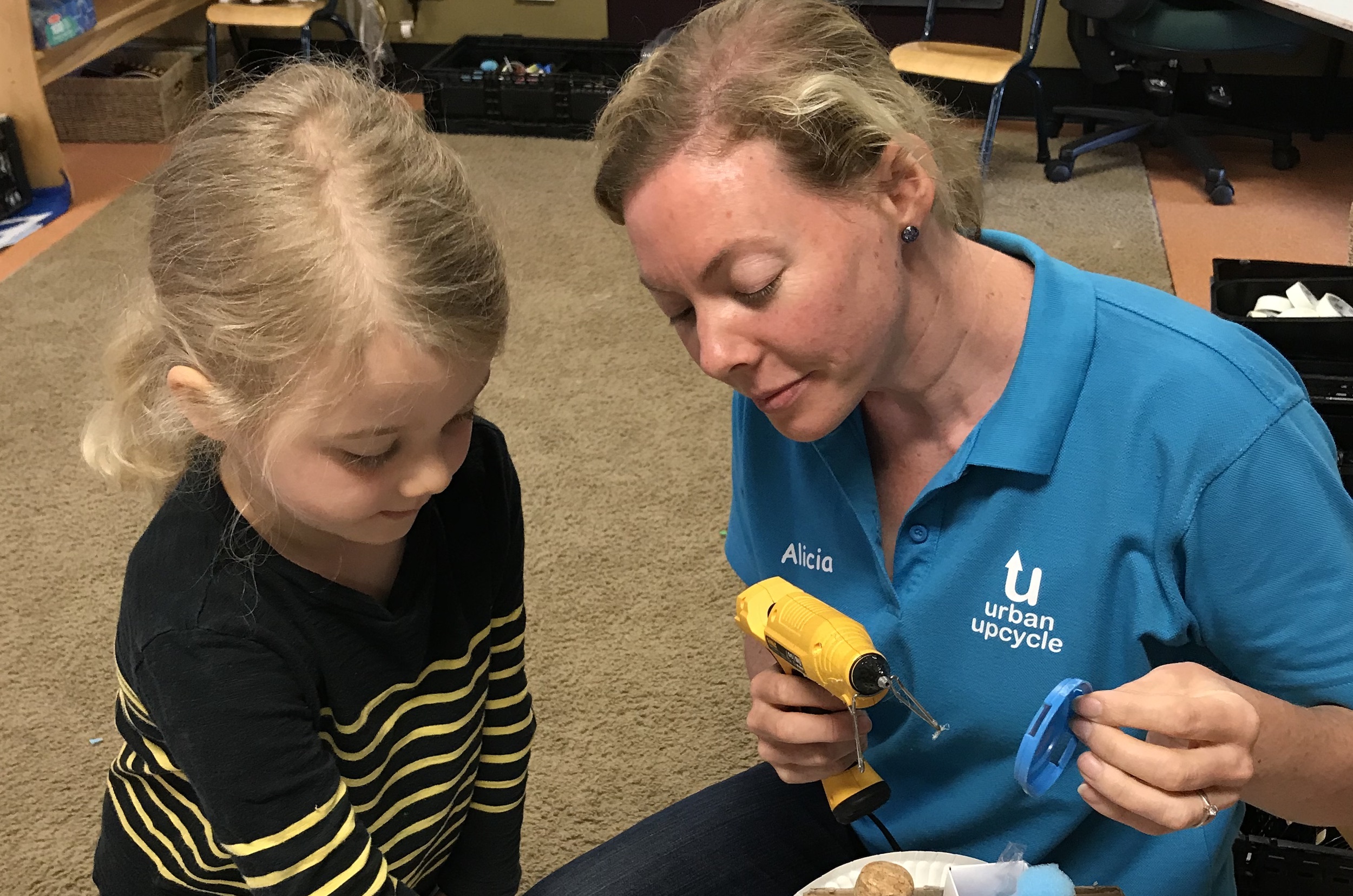 Alicia is a Bachelor-qualified Primary School teacher with experience in a range of educational settings.

She is currently focussed on raising her two little eco-warriors but enjoys some ‘time out’ from mum-life by presenting incursions with Urban Upcycle, promoting a sustainable way of thinking during a fun craft session.

Alicia also does Casual Relief Teaching and presents Performing Arts Incursions and Workshops for schools and community groups, in addition to workshops and presentations around reducing waste and living a more environmentally friendly lifestyle. This, combined with the patience levels and negotiation skills that come with having a five- and three- year old keeps Alicia in touch with her skills as an educator and current practices in educational settings.

A dedicated ‘minimal-waster’, Alicia considers herself a novice gardener (edible and wildlife gardens) and enjoys experimenting in the kitchen (with results that are far from restaurant-quality but very nutritious and delicious).

Alicia has a strong dance background and has recently caught the musical-theatre-bug, supporting and performing in community theatre.

She loves pre-loved goods and enjoys the creative aspect of reusing, repurposing and upcycling, which lends itself nicely to her (not-so-) secret zeal for crafting. 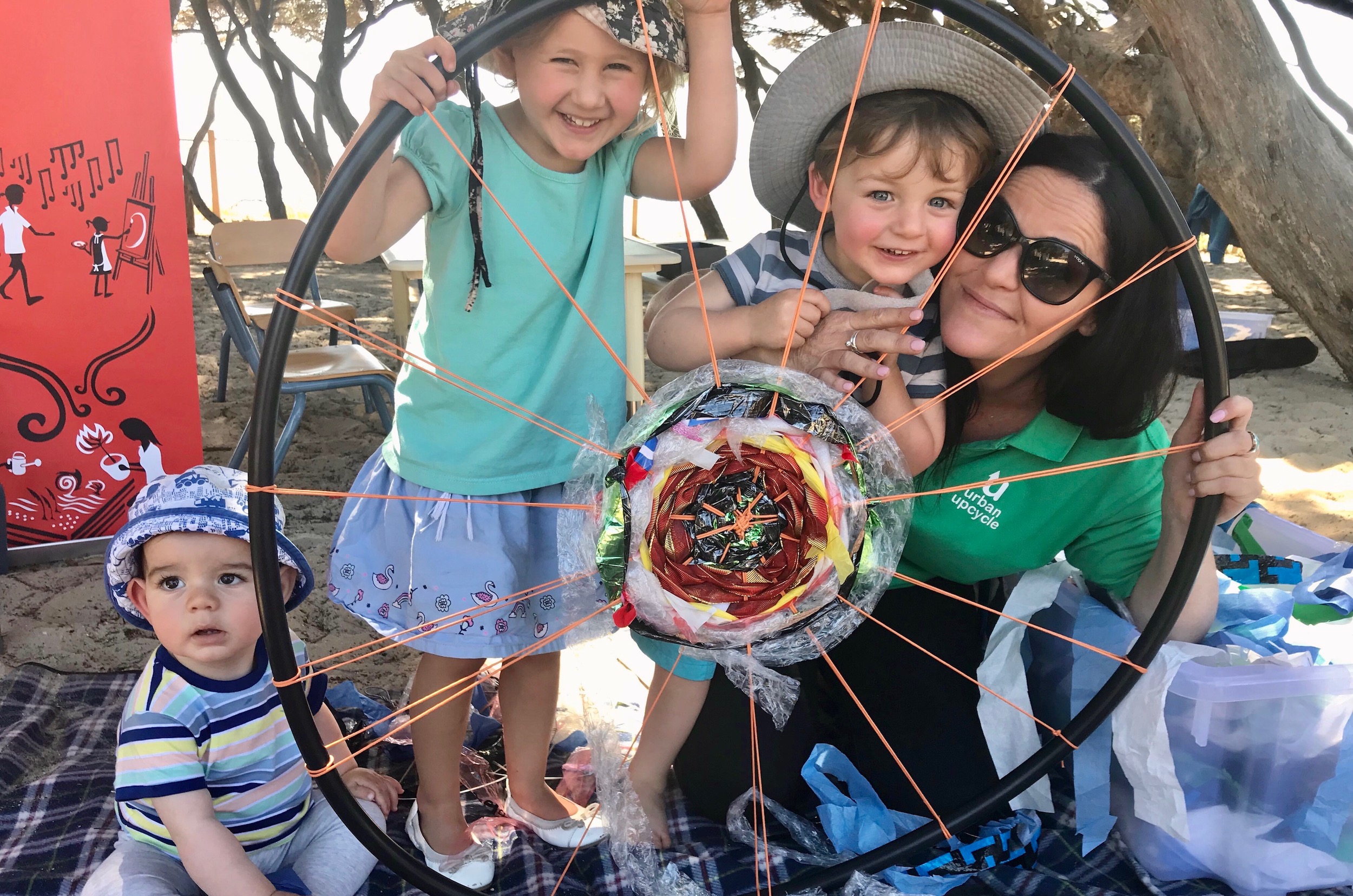 Coraleigh has always been an avid lover of the arts, having been a mural artist from the age of 17 and studying a diploma in visual arts when moving from Zimbabwe to Australia at the age of 18.

This lead to her providing children’s art classes during school holidays, also at kindergartens and early learning centres during term.

On returning to Zimbabwe for some time, Coraleigh worked as an early childhood educator for five years with 2-3 year olds, then two years teaching 3-4 year olds. She is pleased to say that her main source for teaching educational art sessions was preloved materials.

Coraleigh returned to Australia in 2018 and has continually surrounded herself with young children in her personal & work life, working in numerous babysitting roles, providing the opportunity to continue to teach and share her knowledge.

Having worked part time with Urban Upcycle since the beginning of 2019, Coraleigh enjoys the hands on creating time with the children, encouraging them to use their imaginations and helping them to discover what amazing creations they are capable of producing, all the while using repurposed items. 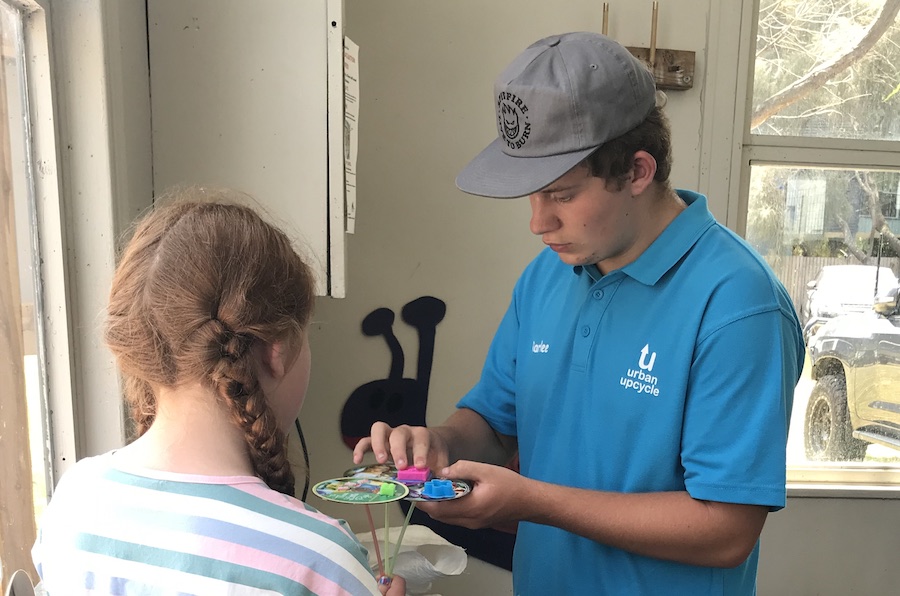 His youthful zest, creativity & mechanical mind, adds that 'something special' to our team.

He's exceptional with young children, having not long ago been one himself!

Helping out during school holidays & at events on weekends, Rarlee considers himself to be a bit of a pro on the hot glue gun.

When Rarlee's not spending time with the Urban Upcycle team or at school, he's playing basketball or found at local skateparks refining his scooter techniques.

Most of all, he has a real passion for dance, specialising in industrial tap & hip hop, where he has the opportunity to showcase his creative flair.

We proudly support these community groups.

Urban Upcycle supports the Mark West Foundation as it was set up ‘to strengthen the legacy of Mark West who set an amazing example of how to make a difference to those around him through participation, community involvement and striving to be the best you can be.’ These too, are attributes we find are important within our personal lives and within the Urban Upcycle business framework. Nicole, having been friends with Mark over her secondary school years, has a great fondness for this Foundation.

Foundation 61 provides a live-in community on the outskirts of Geelong, offering hope and direction for people dealing with life-controlling issues. They provide an individually focused rehabilitation program and their residential program includes full board with onsite staff offering 24-hour support. Their holistic approach aims to support participants on their journey to full recovery, providing a variety of resources and life skills to assist individuals to rebuild their lives. We love and fully support this much-needed service in our community.

Make a Donation to Foundation 61

When we heard about Aussie Bread Tags for Wheelchairs and their amazing work, supporting them was a given. Not only are they helping raise money to supply wheelchairs in South Africa (a neighbour of team member Coraleigh’s home country Zimbabwe), they are also keeping bread tags out of our environment and landfill, plus getting them recycled into something new. Everyone is winning! Drop-off points will be advertised via our events page and on social media.

Details of the Next Collection

As lids are not accepted in our household recycling bins, the only other destination for them is landfill, that is until Lids4Kids provided an alternative! The Holden Rally Team coordinates the Lids4Kids project nationwide to rescue plastic bottle lids from milk, water and soft drink bottles to benefit the environment and kids. We love this so much! If you have bottle lids, please get in touch with them to find out your local drop off point.

Tag your upcycled creations with #urbanupcycleinspired to share them with us!